We've detected that you are using AdBlock Plus or some other adblocking software which is preventing the page from fully loading.

We don't have any banner, Flash, animation, obnoxious sound, or popup ad. We do not implement these annoying types of ads!

We need money to operate the site, and almost all of it comes from our online advertising.

Please add livesportstream.club to your ad blocking whitelist or disable your adblocking software.

Published by %s
Spread the love 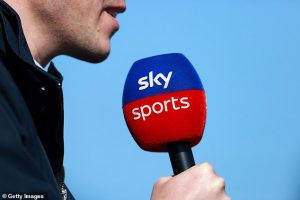 Live Soccer TV Free : Sky Sports and BT Sport Online are planning to join the social media boycott of English football as part of the fight against racist abuse.

As the Mail revealed for the first time on Sunday, Premier League and Football League clubs, as well as the FA and PFA, will unite in a massive blackout of social media platforms this weekend.

On Saturday night, it was announced that 3 clubs would close their Facebook, Twitter and Instagram accounts on Friday, April 30, from 3pm to midnight on Monday. This will include Manchester United‘s Premier League clash with Liverpool.

Athletes are being targeted and football has enough to say after appealing to social media companies to do more to stop it.

Clubs have also encouraged their players and staff to participate. Several clubs have also stated in the article that they would like to see media organizations join their boycott.

Broadcasting sources told MOS that BT Sport and Sky Sports are expected to join the protest. They are due to meet on Monday to finalize details on how they will play their part.

This will be similar to the launch of BT Sport’s anti-racism initiative called Draw the Line, in which the broadcaster informs his presenters, pundits and others about any kind of abuse and prevents it. Sky is in its first three-year partnership with Kick It Out

The MOS-led boycott was called in February when former cabinet minister and head of the football task force, David Mellor, urged clubs to use their power and leave.

The idea is believed to have first surfaced among championship clubs, who were already ready to boycott but agreed to wait to join the rest of the sport. The feeling was that a united stand would send a strong message.